Products from this company are shipped to: all countries globally and are located in: Portugal 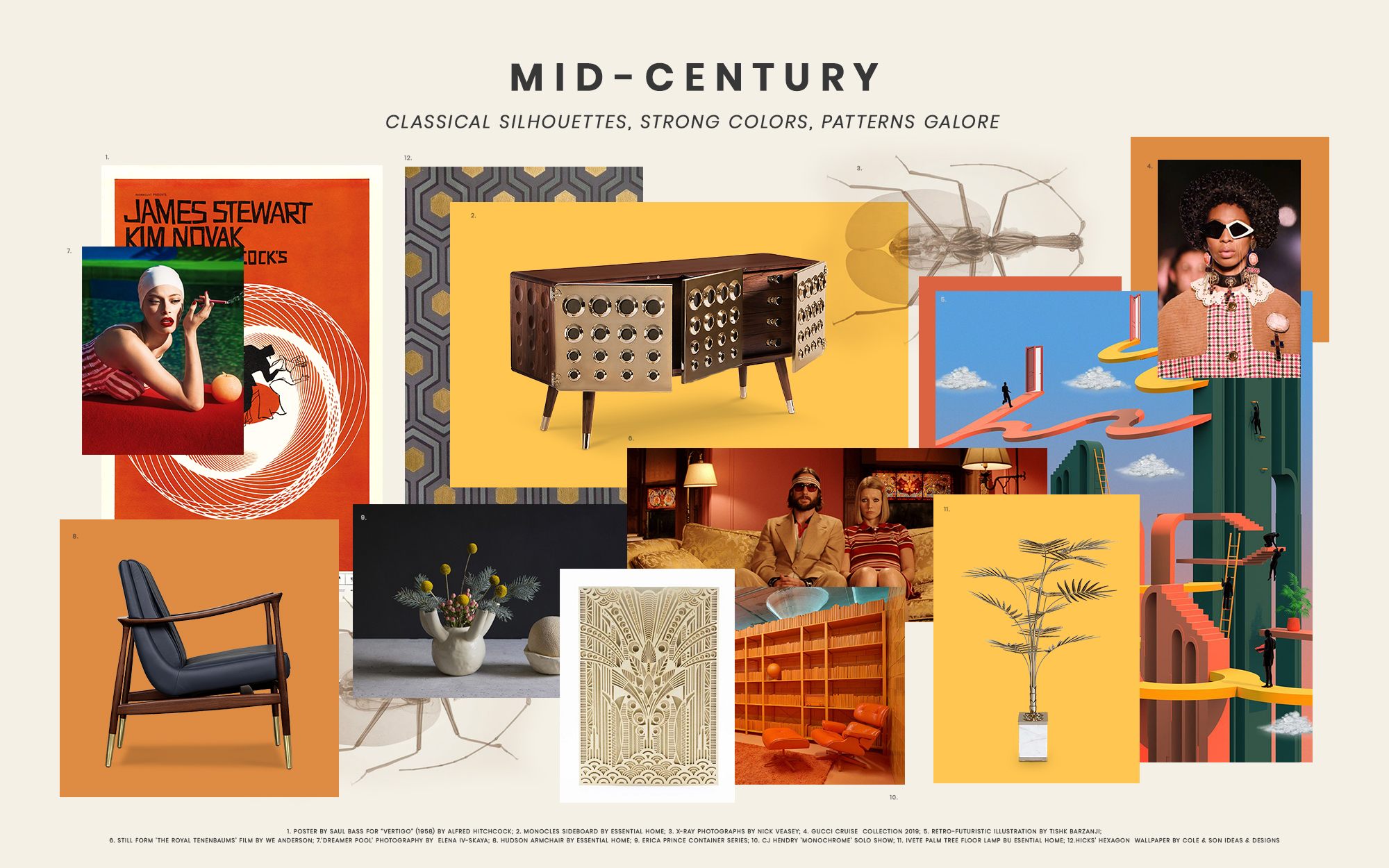 Essential Home is the epitome of bohemian retro design. Its mid-century modern lines merge from important historical references from the ‘30s and 60’s. The harmony of masculine and feminine, classic and contemporary, high and low, is integral to the brand’s sense of style. The brand deals with different, intimate and cosy ambiances that express elegance and luxury. Conveyed by the use of high quality materials, Essential Home pieces have a mid-century modern signature that makes it irresistible to us all. Essential Home gets its inspiration from anywhere really. It can be on the sleek lines of a futuristic chair, retro ads that defined a generation, classic and iconic movie stars and heartbreakers from the 60’s, you name it. Our products are a true combination of colours, matter and design. We intend to create time travels through a strong evocative connotation of the stunning era between the 30’s and 60’s. We want to create a sort of union between the past and present, delivering the perfect combination of contemporary and modern pieces. 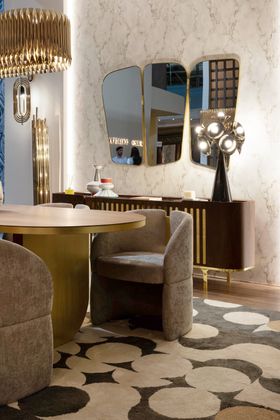 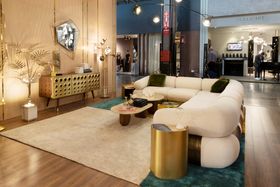 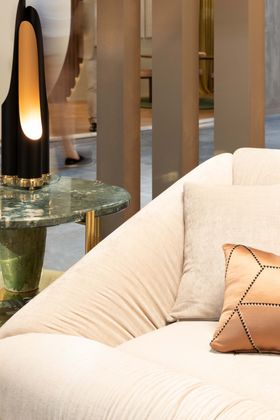 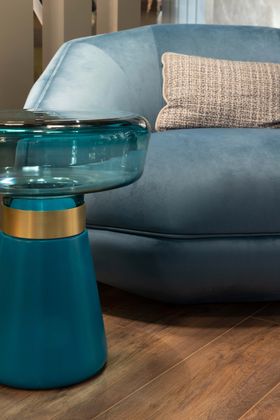 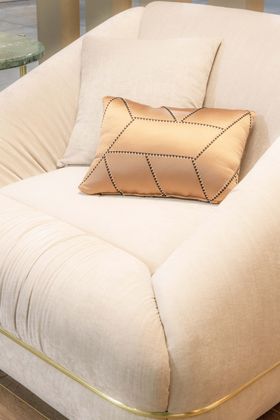 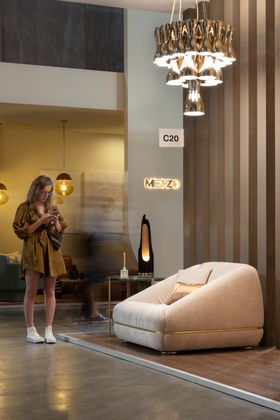 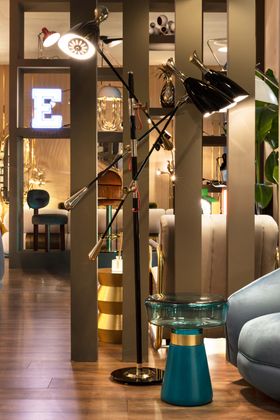 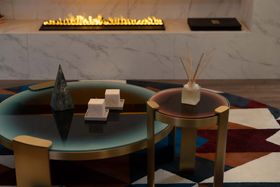 Founded in 2007 in Como, Italy, Draga & Aurel is a multidisciplinary design studio, working in the field of furniture, textile and interior design. Draga Obradovic and Aurel K. Basedow boast a diverse background ranging from fashion to art and craftsmanship: thanks to their original methods, combined with an artistic approach to material and composition, Draga & Aurel are widely recognized for their clever reinvention of bespoke vintage design pieces. Their debut at the 2009 Salone del Mobile consecrated the couple on the international scene, creating the conditions for profitable collaborations with important international companies, including Baxter, Anthropologie, Wall&Decò, Visionnaire, and more recently Essential Home and DelightFULL. Draga and Aurel love to revisit different eras of design, as well as art, fashion, and film, and this collaboration with Portuguese brands Essential Home and DelightFULL, which celebrate mid-century design, was the perfect opportunity to do so. Together, they developed the “Night Fever” product collection that pays homage to the 1970s and 1980s, a time when the most dynamic and forward-thinking thinkers and designers from around the world were present

"Our connection with the brand was immediate. There was a beautiful energy and a perfect fit with our style right away. It was like playing the same music together Draga & Aurel"


While designing the new Essential Home and DelightFULL collection, Draga & Aurel drew inspiration from the late Seventies to Eighties—an era that brought together some of the most dynamic and avant-garde thinkers and makers across the world. Draga & Aurel have created a mix of patterns, materials, colors, shapes, and textures that express the desire to somehow break free from the superstructures, process the sentiments of a past time, and bring back something beautiful to behold and contemplate. In particular, the collection pays homage to the nightclubs of those years, which became a symbol of free expression, creativity, hedonism, rebellion, and emancipation from mainstream culture. It was an encounter between different minds and souls under the glittering lights of the dance floor.


The Greek word “XENOS” means ‘stranger’ or ‘rare’ and denotes the chemical element that can add very special and strong colors to light. Xenon was also a nightclub in Times Square, New York, popular from the late Seventies among the NYC “fashion crowd” and celebrities such as Andy Warhol, Mick Jagger, Freddie Mercury, and Elton John. It was style meeting creativity, just like the Xenon low modular sofa and armchair, pouf, and various elements that allow various compositions to be created for a very relaxing living area.


ELO is pure rhythm. It was conceived listening (and dancing) to the sounds of the Electric Light Orchestra, the infamous British band of the 70s, an explosive mix of glam, hard-rock and orchestral melodies. This modular sofa and armchairs embody all the strength of that music and the hedonism of an Era of new freedoms.


Qube sofa recalls the elements of the homonymous discotheque in Rome, one of the “cathedrals” of the Italian nightlife: industrial yet minimalist style, revised with a futuristic and high-tech touch. This modular sofa is also a subtle invitation to conviviality, it is furniture defining the space (and becoming a new space of living), the place to encounter one, two or many people.


Dress as though your life depends on it” was the motto behind the dress code at Taboo, the night organized by performance artist and fashion designer Leigh Bowery at the Maxwell Club, London, in 1985. His transformative looks have remained in history like the extravaganza of that event, which redefined what nightlife looked like. At the same time, the Taboo items give side tables new significance and a prominent role as the protagonists of the room.


We like the idea of connecting these back-printed glass tops with color pools to dip and dive into. As the fashion crowd used to dive, in the golden age of Paris nightlife, into the most iconic nightlife spots, the place-tobe for artists, designers, musicians, and creatives from around the world. Those tables celebrate the joie de vivre and the pleasure of indulging in some frivolity and “caprice” in life


Roxy is one of those high-stepping names with plenty of moxie. The glam rock band Roxy Music is one of Draga’s favorites and Roxanne by The Police is a song she loves. As well as the club. Symbol of the London punk scene in the late Seventies, the Roxy provided a platform for bands such as The Clash, The Police, and Siouxsie and the Banshees that made the history of music. Those eclectic vibes inspired the creative process behind the Roxy chairs.


Maxime table pays homage to Maxime Gaillard, the name behind a little bistro in Paris opened in 1890’s that became a legendary spot of Paris nightlife. Living the peak of its glory a century afterwards, in the 1980s, when it was owned by the visionary designer Pierre Cardin, Maxim’s has been receiving the finest of French elite all along its history.


The word “Nepenthe’’ first appears in the fourth book of Homer’s Odyssey, meaning ‘No pain, no sorrow’. It’s also the name of one of the symbols of Milan’s nightlife in the Eighties: the Nepentha Club has always hosted crews of models, actors, and musicians, becoming a point of reference for the so-called “Milano da bere”. The Nepentha armchair and pouf are inspired by those glamorous nights


A piper is an itinerant musician who plays the pipe. It’s also the name of The Piper Club, which wrote the history of nightlife in Rome, becoming one of the Italian capital’s most important venues and the epicenter of its club scene. This “cult” place, which defined the trends of the Sixties, Seventies, and beyond, inspired Draga & Aurel in the design of their Piper chairs. 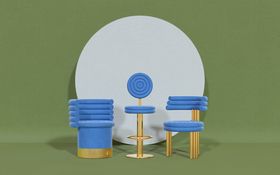 HOLLYWOOD GLAMOUR by Masquespacio: A collection like “in the movies”


Taking inspiration from the romantic movie “An Affair to Remember”’ to the burlesque world of Zsa Zsa Gabor and the strong presence of Charlie’s Angels, the NEW “Hollywood Glamour” by Masquespacio is a collection that redefines the limits of the products and shows its versatility in unique and unexpected spaces.


Three sets of products will take you to your favorite movie set through excellence in design that is adaptable for every type of project, from the modern residential idea to the shabby chic hotel bar design. The “Hollywood Glamour” collection is your opportunity to bring some of the most iconic movie sets into your design project.

Like the iconic movie from the 90s era, this unique series of products designed by Masquespacio brings that passionate feeling from a forbidden love affair into our daily lives. Featuring an inspiring design and iconic personality, each one of these unique pieces can be a statement on its own, but it is when we make the perfect pair that they show their ultimate glow.

Several times nominated for Emmy and Golden Globe awards, Farrah Fawcet gained international fame, due to her participation in the popular show “Charlie’s Angels”. In their new collection for Essential Home, the Masquespacio designers wanted to capture Fawcett's strong presence in a unique lighting set that is ready to impress with its sophisticated line and material combinations.

It’s impossible to travel back in time without recalling the burlesque inspiration that marked that era. Fringes, strong color, and sensuality, three ideas that personify the iconic “Moulin Rouge” movie and that describes one of the seating sets of the “Hollywood Glamour” collection by Masquespacio.